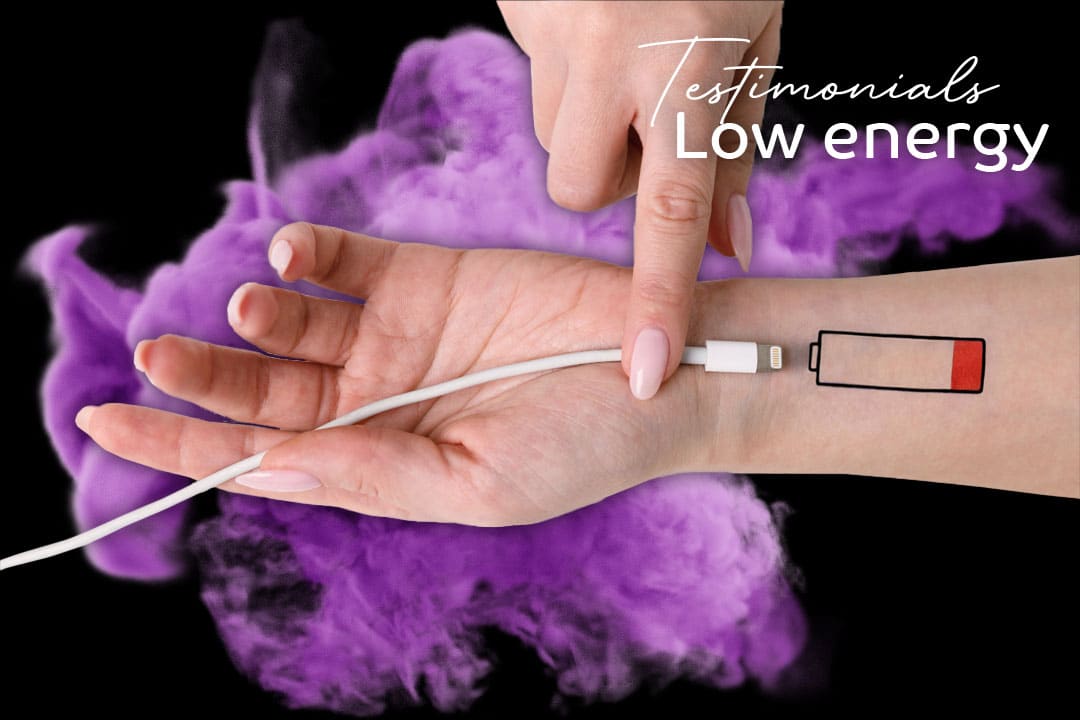 "My dad had a massive stroke on 05 Feb 2016. After his stroke he couldn't talk for more than 2 years and he suffers from epilepsy as a result of the stroke. In August 2019 I met Benita and Marié and was introduced to their magnesium products. Initially only me used Mag2, but as my friendship with Benita and Marié grew my knowledge of magnesium an its benefits grew. I realised that if I didn't give my dad Mag2 he starts getting blackouts / fits. My dad has now reached a point where he asks me to give him Mag2 everyday and he hasn't had another blackout / fit since. Magnesium has a lot of benefits and I will recommend Mag2 from Magnesium Café to anyone as I believe that it is THE best magnesium on the market." I told Benita about my dad's condition and she insisted that he starts drinking Mag2. At first my dad did not want to drink the Mag2, but I insisted. He eventually realised that when he drinks Mag2 he feels way better.

“I am an entrepreneur and that requires long hours daily. That started taking its toll on my health and was feeling tired at night. To such an extend that precious time with my family was getting more and more limited! To top it all I have arthritis and was in all lot of pain at night, especially after a long physical day. Then Benita introduced me to MAGNESIUM and explained the benefits of Mag 2. So I started using it since thought I had nothing to lose. I could honestly feel the difference in the 3rd day already! I had more energy, slept better at night and even started gaining weight (considering I was a bit too skinny, it’s a good thing) I believe this is an amazing product!”

“I used to be an avid runner and mountain goat and after a long break I tried for years to get back into training but I always crashed after about 14 days or so and experienced major headaches, body pains and extreme fatigue. I was devastated to be finally be diagnosed with Fibromyalgia, it meant I had to give up what I so loved. When I came across Magnesium cafe I was skeptical, having tried many things that could supposedly help with the constant overwhelming pain all over my body and sharp flare ups. The result wasn’t instant but over the past 5 months of taking it daily I have realized that I have not had a flare up. My energy levels have I creased and my sleep is more rejuvenating. I started walking in the mountain again. I now find myself trying to run every so often for a few meters and have not experienced any of the side effects or crashing in the days to follow. My Fibro is not cured but I am able to do so much more without fear of total fatigue, debilitating skinpain or violent flare ups. I believe Mag 2 was/is the catalyst that helps my body rebuild a healthy balance and maintain better during times of physical stress and the normal life stresses that were too overwhelming before. Thank You Magnesium Cafe.”

“After pregnancy, I had challenges with my legs aching. Whenever I sat for long periods at a time, getting up would be challenging and I would literally have to walk slowly just to get my legs to operate properly. I had low energy levels and I thought it’s probably just because I am breastfeeding and have sleep deprivation looking after a new-born. I started using Mag1 daily and within a week I felt a MAJOR difference in my body. My leg ache stopped and I had A LOT more energy! I would DEFINITELY recommend Magnesium Café to everyone.”

“Being a hairstylist is a very tiresome job. Physically and emotionally. Standing on your feet the whole day and entertaining your clients. I‘ve suffered from fatigue and anxiety almost my whole life. Drinking almost everything and anything that ‘might’ be a quick fix. Energy drinks were my second oxygen. I actually accepted the fact that this is how I’m going to feel for the rest of my life. I’ve gotten to a point where my anxiety was so bad, I could barely open my mouth in the morning from biting down on my teeth while sleeping. I also got recent news that I’m insulin resistant and it would be very difficult to lose weight no matter what I try. I felt like a lost cause. Then I met these incredible people Benita en Mari Niemann, totally unrelated we got on the Magnesium subject. She gave me a bottle to try, and sceptical I took it, thinking just another pill or substance to try and fail. 3 days later I started to feel huge changes. My energy level was at a point I didn’t stop talking. I felt so calm and relaxed. The feeling of being rushed was gone. I slept like a baby and I was not biting down on my teeth anymore, and best of all, I started losing weight!! 5kg in total. My bottle was done and not thinking too much of it, two days after stop drinking it, I can feel myself slipping back into my fatigue and anxiety! Magnesium changed my life and I can’t see myself ever going without it again!!“

“So excited to receive my order from Magnesium Cafe mag 2. This is an incredible product. I would just like to confirm that the Mag2 is very effective, I’m so grateful for how much this is working for me.”

“Lockdown, working from home + home-schooling getting you down boost your energy levels with Magnesium Café’s products. Magnesium Cafe is safe for the whole family to use. With lots of benefits my favourite about their product is the boosting of energy, immune & concentration levels for myself as well as for the kids!! Highly recommend.”

“During 2019 I was feeling rather tired, more exhausted than anything. I thought it was the job I had started at the beginning of the year as it was quite demanding. Waking up in the morning I felt as if I haven’t slept a wink, yet I had a full 7 hours rest. I put the thought of something being wrong with me in the back of my head and just blamed my age, yet I was only 34. Then I got to a client who recommended Mag Cafe and said I should purchase these tablets. Out of desperation, I decided to give it a try. Honestly, without realizing it I was able to get up early do quite a bit of things other than work throughout the day even fit some exercise in. Then I ran out of tablets and was made aware it’s going to be produced in powder form. I was so disappointed when I spoke to Bernita but she assured me it’ll be just as effective. Due to the product still being produced and all the background things it took some time for me to receive it and at this time was not using anything. During this time emotionally, mentally and physically I could feel my body taking a knock. Once again waking up in the morning I was more tired than before I went to sleep. I had no energy to do anything and this affected my mood towards my immediate family in the house. By 7pm in the evening I’d have to be in bed as I’d be too tired. I received my products on Tuesday with much joy and so grateful to Bernita for going the extra mile. I started using it immediately, by Thursday I was doing some extra things in the evening, my husband even passed a remark to say I’m up so late. I was in bed by 9pm. Yet only fell asleep later, then my husband said you’ve got work in the morning. In the morning I was up at 6 am fresh as ever. Only as I drank my formula in the morning that I realized how much this adds value to my body. I would just like to confirm that the Mag2 is very effective, I’m so grateful for how much this is working for me.”

“When I started my weight loss journey, exercising 5 to 6 days a week was my goal but I could never get past 3 days due to fatigue, muscle soreness and low energy. I tried other magnesium products but I still struggled with muscle soreness. When I was introduced to Mag 2 from Magnesium Café, I was very skeptical but its effectiveness won me over. I’m now able to exercise 5 to 6 days a week and still have enough energy for walks with my kids. I love my Mag2 and it’s part of my post workout arsenal.”

We use cookies on our website to give you the most relevant experience by remembering your preferences and repeat visits. By clicking “Accept”, you consent to the use of ALL the cookies.
.
Cookie SettingsAccept
Manage consent

This website uses cookies to improve your experience while you navigate through the website. Out of these, the cookies that are categorized as necessary are stored on your browser as they are essential for the working of basic functionalities of the website. We also use third-party cookies that help us analyze and understand how you use this website. These cookies will be stored in your browser only with your consent. You also have the option to opt-out of these cookies. But opting out of some of these cookies may affect your browsing experience.
Necessary Always Enabled
Necessary cookies are absolutely essential for the website to function properly. These cookies ensure basic functionalities and security features of the website, anonymously.
Functional
Functional cookies help to perform certain functionalities like sharing the content of the website on social media platforms, collect feedbacks, and other third-party features.
Performance
Performance cookies are used to understand and analyze the key performance indexes of the website which helps in delivering a better user experience for the visitors.
Analytics
Analytical cookies are used to understand how visitors interact with the website. These cookies help provide information on metrics the number of visitors, bounce rate, traffic source, etc.
Advertisement
Advertisement cookies are used to provide visitors with relevant ads and marketing campaigns. These cookies track visitors across websites and collect information to provide customized ads.
Others
Other uncategorized cookies are those that are being analyzed and have not been classified into a category as yet.
SAVE & ACCEPT